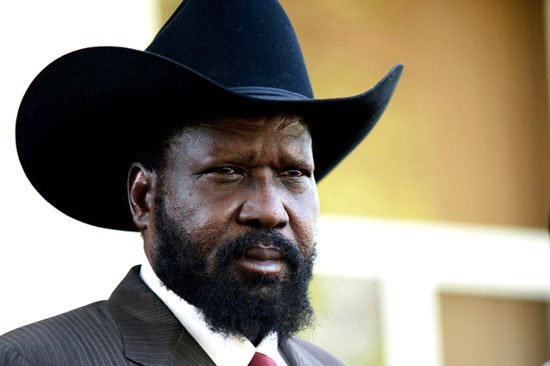 I am a native of Sudan and now of South Sudan, and I’ve held several positions inside and outside of the government of Sudan.

America has always had a special place in my heart.

Let me state clearly, that without the help and support of the United States and especially former president, George W. Bush, there would be no independent South Sudan today.

South Sudan split from Sudan and became a sovereign nation on July 9, 2011. We are a proud people and have much to contribute to the global community.

My president, Salva Kiir Mayardit, fought for many decades in the bush to help bring about our independence.

Whatever you think about Salva Kiir Mayardit, he is our president and our people put him in office. The South Sudanese never quite understood why President Barack Obama openly talked about circumventing the will of people, by coming up with a “different plan” for the future of the fledgling nation.

In 2015, Voice of America reported that Obama contemplated moving forward “with a different plan,” because he thought that our leaders were “incapable of creating” a lasting peace. Obama and the United Nations tried to enforce a strict August 17 deadline for signing the peace deal that year.

The New York Times also reported that Obama said that the world might have to come up with a “different plan” for South Sudan our young country’s feuding leaders failed to meet the August 17 deadline for a peace deal. President Kiir later signed the peace deal, even though he had reservations.

“President Obama and regional leaders threatened recently to expand international sanctions and impose an arms embargo if the rival factions did not sign a peace deal,” The New York Times reported.

I was thrilled to see the political change in the U.S. with the election of Donald Trump. Republicans have always been good to the continent of Africa and especially to South Sudan.

We want America to know that we are open for business, investment, and a mutually beneficial relationship.

Yes, we have oil, but we also have great agricultural opportunities, as well. We have some of the most fertile land anywhere in the world.

Earlier this year, our finance minister pledged to double oil production to nearly 300,000 barrels per day. We also have some of the most fertile, pristine, virgin land in the world.

We can also be a staunch ally to the U.S. in the global fight against terrorism. We are neighbors of Kenya and Ethiopia. We are also a majority Christian nation.

So, what are our priorities relative to re-engaging with the American people and the Trump Administration?

The first priority would be for the U.S. to restore economic assistance to South Sudan, so that we can address the immediate issue of lack of food for our people. With the rainy season having started, food access has become even more difficult. Our people count on the generosity of the American people in this regard.

It is my sincere hope that American foreign policy under President Donald Trump will return to the old United States policy of support in friendship, coupled with respect for the sovereignty of states.

The government of South Sudan, under President Salva Kiir Mayardit and First Vice President Taban Deng Gai are doing their best to implement the peace agreement that was imposed on them by the outside world under the extreme pressure of President Obama. The president of South Sudan and the first vice president have not yet restored peace to their country, but they are trying very hard. They are enlisting the involvement of their entire population. Our leaders have initiated a national dialogue, involving a diverse group of community activists. Our president and first vice president need sympathy, encouragement and support, to achieve peace for their people.

It is my sincere hope, that the Trump Administration will give support for these new peace efforts in South Sudan, rather than holding the threat of regime change over our heads. 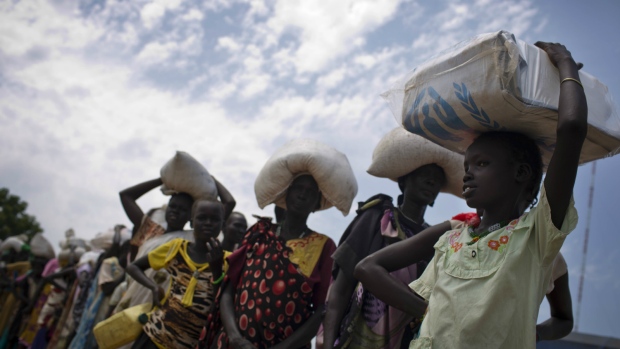 A young girl who fled fighting in nearby Leer in recent months, queues for food aid at a food distribution made by the World Food Programme in Bentiu, South Sudan on Wednesday, Oct. 19, 2016. (Kate Holt / UNICEF)

The woman appeared content for the moment, waiting under a tree for a little bit of salvation to fall — quite literally — from the sky.

International Development Minister Marie-Claude Bibeau recalled seeing the woman in a northern remote region of South Sudan during a four-day visit that wrapped up Monday.

The woman was one of the four million South Sudanese who have been internally displaced because of the four-year-old civil war raging in their country. Another two million have fled the country as refugees.

“It’s the middle of nowhere for us, she didn’t even have a roof over her head,” Bibeau recalled in a conference call.

“She was sleeping under a tree waiting for airdrops to feed her family.”

South Sudan has emerged as one of the newest drivers of the larger global crisis in displaced people, one that reached epic new proportions Monday when the United Nations released the latest record-breaking number quantifying the problem: 65.6 million people on the planet have fled their homes.

The South Sudanese homeless are almost totally dependent on humanitarian assistance because when they do find sanctuary, they can’t resettle safely or grow food to feed themselves, said Melanie Gallant, head of humanitarian campaigning for Oxfam Canada.

“We’re talking about people who are used to going through shocks and stresses, but they’ve just exhausted their coping mechanisms. The markets have collapsed in most places so even if you had money to buy food, it doesn’t mean you have any food to buy in the market.”

About 40,000 South Sudanese refugees have entered Uganda every month over the last year, 86 per cent of them women and children, said the World Refugee Council, a new organization run by Canada’s Centre of International Governance Innovation.

Michael Messenger, the president of World Vision Canada, has been in the northern Ugandan town of Arua watching the influx of South Sudanese. He said Monday about 100 unaccompanied children are crossing the border each day; their parents have either been killed or have otherwise fallen by the wayside during the exodus.

“It’s the fastest growing refugee crisis in the world; children are at the heart of it,” said Messenger.

“While Uganda has been very open, at a certain point, there’s a breaking point. There are parts of northern Uganda where the refugees actually outnumber the host communities.”

Canada announced an additional contribution of $86 million to assist famine and war ravaged South Sudan. That’s on top of the $36.9 million Canada gave to South Sudan in March.

Bibeau said the funds will improve access to basic health services, including family planning and reproductive health care for women and girls, as well as increasing access to food.

Bibeau, who also met government officials on the four-day trip, said the suffering can only be alleviated if the warring factions lay down their arms.

“We’re obviously concerned about the constant flow of South Sudanese refugees going to neighbouring countries. Uganda has been extremely generous,” she said.

“What is needed is a durable solution for peace in South Sudan, and we support the role of South Sudan’s neighbours in this process.”

The new funds announced Monday are an addition to the Famine Relief Fund recently announced in response to the widespread food crises in South Sudan, Somalia, Nigeria and Yemen, in which the government will match the contributions of Canadians until June 30.

“Conflict is really the common theme between those countries,” said Gallant.

“Of course, as populations are being displaced, that’s a big factor for what we’re seeing in hunger crises and famine.”

As the world’s newest country South Sudan continues to battle insecurity and a civil war, President Salva Kiir has ordered the country’s police to shoot robbers dead, including those who break into shops at night.

The Sudan Tribune reported on Sunday that Kiir gave the order and urged the police to enforce security and protect citizens while speaking at an official function in the capital Juba on Saturday night.

Kiir’s comments were made at the passing out parade of the Joint Integrated Police (JIP), which is the only body under the 2015 peace deal mandated to provide security during the transitional period in the most conflict-ridden and fragile areas of the country.

The peace agreement outlined that the JIP would comprise 5,400 police personnel as well as the equivalent number provided by the government and the opposition.

Resorting to this extreme measure appears to be Kiir’s frustration, and that of his government, at the rising crime rate in Juba following the outbreak of the latest round of fighting in 2013.

However, despite the country’s continuing decline economically, politically and the failure of the warring sides to implement the peace deal Kiir denied that peace was collapsing, instead confirming his commitment to the peace plan.

“I am saying the peace agreement is alive and is progressing well and is very strong,” said Kiir.

But then subsequently contradicted himself saying the peace agreement was bad and that the architects of the agreement were unable to implement it due to its complexity.

Kiir statements came after a recent regional summit where Intergovernmental Authority on Development (IGAD) leaders decided to convene a “Revitalisation Forum” for the implementation of the Agreement on the Resolution of the Conflict in South Sudan (ARCSS)signed in August 2015.

“The full implementation of ARCSS remains to be the only viable way forward to bring about peace and stability and create the basis for a democratic political system in South Sudan,” they said.