One hundred children a day are now crossing the border into Uganda from the war, without their parents – creating a ‘children’s emergency’ 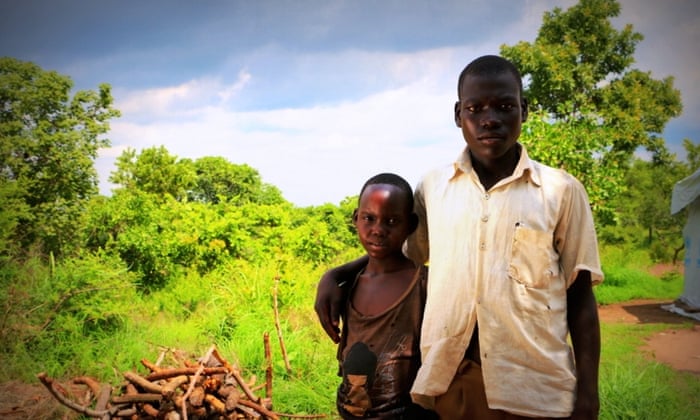 Nadal, 16, and his sister Talia, 12, who are refugees from Juba, South Sudan. Photograph: Samuel Okiror

Nadal and his four siblings went to school as normal on a bright day in late summer. They returned to carnage.

“When we came back home for lunch, we found it had been bombed and our parents killed. They threw a bomb into the house that killed my father and mother,” says Nadal, 16.

“We left our parents in a pool of blood. We ran and walked for three weeks from Juba to Lanya. We were sleeping in the bush and didn’t have food to eat. It’s good samaritans who used to give us something to eat for survival.”

Nadal, his three sisters, Rachael, 14, Talia, 12, Lamya, 19, and brother Isaac, eight, are being looked after by another family at Imvepi refugee settlement in northern Uganda. Half a million children are here without mothers or fathers.

“I miss my parents so much,” says Nadal. “But there is nothing much I can do. I want to get quality education in Uganda and go back to South Sudan to take over what my father was doing. He was a great doctor.”

Uganda is struggling to cope up with a staggering number of unaccompanied children fleeing violence in neighbouring South Sudan. They have lost or been separated from their families since the renewed fighting in their homeland broke out in July last year between troops loyal to President Salva Kiir and his former deputy, Riek Machar.

The majority of these children have witnessed haunting acts of violence and face exploitation and abuse – both along the journey and in Uganda’s camps.

Agencies working in the area say around 100 children a day on average, 60% of the nearly 1 million South Sudanese refugees, are crossing into Uganda, a country now hosting more refugees than any other in Africa.

“Uganda is experiencing the fastest growing refugee crisis in the world … Many of the children have lost one or both parents to the senseless violence that is being perpetrated in South Sudan,” says a spokesperson for the UNHCR, the UN refugee agency. He says the war is creating a “children’s emergency”.

Amalia, 14, from Yei, in eastern Equatoria, says: “We witnessed terrible things on our journey. I was terrified and feared being killed. I can’t forget how the armed people attacked and killed people on our way here. 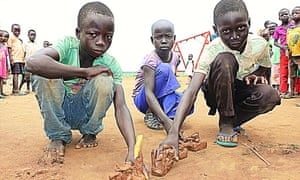 South Sudanese children at a refugee camp in Uganda. Most of of the children have witnessed terrible violence, and face exploitation and abuse. Photograph: Samuel Okiror

“I am facing a lot of challenges. I have no one to take care of me. I lost my parents.” She doesn’t know if her aunt, who also fled, is dead or alive. “We took off in different directions when the fighting started,” she says.

“We don’t have anything here. We at times have one meal a day.” She does odd jobs for the foster family who have taken her under their wing so that they can afford to feed the extra mouths.

Judy Moore, World Vision’s response director in Uganda, says the challenges the children face are enormous. “We hear many stories of children’s parents being shot by opposing forces. Some children as young as 10 are raped, they are deeply traumatised and they should not see and experience what they have seen and experienced.

“Psychologically the children need counselling, food, assistance and stability. They need to adapt and learn different languages and different cultures, they have lost all of their friends and families so even socialising for them has become challenging. They think of how I can get a meal, where do I live.”

This week, the NGO is attempting to highlight the affect of the conflict on children through its #BearsOnStairs campaign – on Thursday, 700 teddy bears will be placed on the steps of St Paul’s Cathedral in London to represent the number of children who arrive in Uganda weekly.

As well as giving accompanied children medical and psycho-social care, the UNHCR and its partners place them with foster parents at refugee camps.

World Vision has helped about 1,000 separated children reunite with their relatives and runs “child-friendly” spaces for counselling and play across Uganda.

“The dream for an unaccompanied or separated child is reunification with the family. We are stressing family reunification of these children as the best option,” says Robert Baryamwesiga, the Bidi Bidi settlement commander. “We should be supporting the foster parents with housing units, shelter and providing basic items, which we are not doing now because of the funding constraints. That creates a bit of a problem.”

The UN appeal for money to support South Sudan’s refugees is only 20% funded. “Chronic and severe underfunding is severely hampering the efforts of the refugee response,” says a UNHCR spokesperson.

For many of the children, all they have left are their aspirations. “I am studying in a congested class,” says Amalia. “But I am determined. I want to go to university and become a lawyer, to help the community address the injustices and dispense justice to the oppressed.”